Construction of the Secondary School classrooms still in progress.

The first classroom is almost complete. The school is waiting to install the windows, doors and to add classroom furniture. The classroom building has 2 classrooms each with a capacity of 45 students. In addition to the classrooms there are 2 small offices as well.

Even though the community does not have enough financial resources they certainly put in their efforts by volunteering their labor. Students, parents and other members of the community do not hesitate to work.

Currently the living conditions for the teachers are not very good. They are living in temporary housing, 1 room per teacher/ family and the housing is approximately 1.5 miles away from the school. During the rainy seasons walking to school through the thick forest is a challenge.

This upcoming year, 2019, we have decided to focus on constructing 3 cottages over the next 2 years to alleviate this issue. Good news is we have already began construction of the first cottage. Big thank you to the early donors towards this project. Foundations have been dug and the construction is under way.

Status of the cottage as of November 2018. Pouring cement for the floor and building up to the windows level will take approximately 300 bags of cement.  Each bag cost $20.

The Secondary school proposes to establish a project with a carrying capacity of 3 000 layer birds per year. This has the potential to generate an annual profit of USD 32, 000. To achieve this, poultry infrastructure and the right staff has to be in place. Presently the community neighbouring the Arnoldine community is not supplied with eggs providing a ready market to which this project responds. The Secondary school requires USD50 000.00 capital funding payable over a two (2) year period. The source of the funding is through special donations.

Currently there are no income generation projects at Arnoldine Mission Centre or the Secondary school that can contribute meaningfully to income generation for self – sustenance. As such the community and the secondary school presently face challenges in meeting some of its overhead costs. The layers project can be a strategic business enterprise that has the potential to generate significant profits. These profits can be used to fund operations of the school bringing about financial stability. Financial stability of the school can be centred on exploitation of available productive resources. Productive resources include among others arable land and adequate irrigation water from a perennial river. 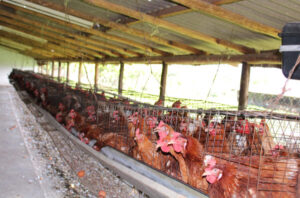 A special thank you goes to Africa University who visited Arnoldine Secondary school in July 2018 to take the survey of the land and coming up with the recommended projects for the secondary. Benton Harbor Sunrise Rotary club has shown some interest on this project.

Sunflower is one of the drought-resistant crops that does not require plenty of rain or irrigation. It is one crop that does not require much labor to grow, tend and process either. Where there is irrigation, farmers may have two crops in one year. Sunflower may turn into cash as soon as it is harvested.  Members of the Compassionate Consultation Initiative Project – Zimbabwe (CCIP) organization from Kansas, USA travelled to Arnoldine in 2017. CCIP-Zimbabwe held a workshop on August 7th 2017 at Arnoldine mission, inviting farmers interested in moving from subsistence to sustenance to join the Sunflower growing and processing project. The purpose of the project was to help one another gain a sustainable lifestyle.  The discussion to set up a sunflower oil production plant is still being discussed among CCIP, Rotary club in Mutare Zimbabwe and the Kansas USA Rotary. Dr Kennedy Mukwindidza is spearheading this project.

Example of the desks needed for the kids.

Arnoldine clinic serves the people of Arnoldine and the neighboring villages within 20 miles around Arnoldine. The clinic started back in 1963 when Sister Winnie Thomas, and her husband Rev. Norman Thomas, came to Arnoldine in 1963 as the first missionaries to live there. Word spread quickly throughout the area that a professional nurse was now living at Arnoldine Mission. Arnoldine women made available their thatched-roofed women’s clubhouse to be the first clinic building.

Today the clinic continues to grow but they still miss very basics items such as electronic scale for weighing new born babies, Doppler systems, washing machines and driers to take care of the clinic laundry.

This past April LBH had a fundraiser at the Stevensville United Methodist Church in Stevensville Mi. and the United Methodist Women donated 22 receiving blankets for the Arnoldine Clinic. The blankets were presented to Pastor Maforo of Caldwell Kansas originally from Arnoldine Mission as well. Mr. Maforo was going to hand deliver these blankets to someone who was going to Zimbabwe upon his return to Kansas after the fundraising event. Since then the blankets made it to Arnoldine clinic and many lives have been impacted already. 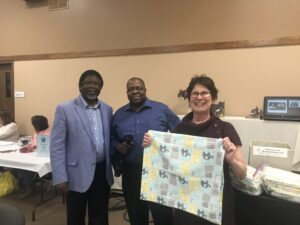